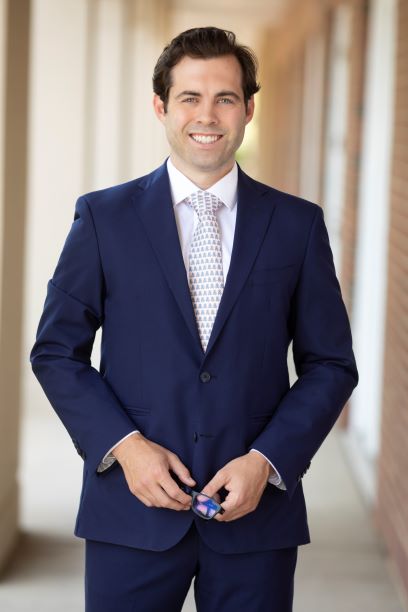 A native Midwesterner, Trevor Klinkner was born and raised in Madison, Wisconsin. Growing up, Trevor was very involved in athletics, mostly basketball and then focusing on baseball, later participating in the Senior League World Series against teams from all over the world.

Dr. Klinkner earned his Doctorate of Podiatric Medicine Degree from the Temple University School of Podiatric Medicine in Philadelphia, PA. He received multiple awards and scholarships and spent time tutoring younger classes in anatomy and physiology. He was involved in the school’s Gait Study Center and traveled to the United States Military Academy at West Point to gather data for research.

Dr. Klinkner then went on to complete his surgical training with a three-year residency at Inova Fairfax Medical Campus in Northern Virginia, one of the most prestigious podiatric surgery programs in the country. In addition to foot and ankle surgery, he rotated through numerous other specialties, notably vascular surgery, orthopedic trauma, orthopedic oncology, and plastic surgery.

He performed more than 1200 surgeries and 1800 procedures, from elective bunion and hammertoe surgery to more complex rearfoot and ankle reconstruction under the training of both podiatric and orthopedic foot and ankle surgeons. Dr. Klinkner brings extensive expertise in all areas of foot and ankle care with a special interest in pediatric and adult flatfoot reconstruction, arthritis, total ankle replacement, and foot and ankle traumatic injuries such as sprains and fractures, all with a focus on arthroscopic and minimally invasive techniques when possible.

Whether it is conservative care or surgical intervention, Dr. Klinkner strives to deliver personalized, compassionate, and superior patient care for the relief of foot and ankle pain, consistently supported by the latest technology and evidence-based medicine.

He is actively involved in research throughout his medical training with multiple 1st place awards for posters presented at the annual scientific conference of the American College of Foot and Ankle Surgeons.

He is an active member of the American College of Foot and Ankle Surgeons and the American Podiatric Medical Association.

Trevor and his fiancé, Ali, reside in Washington, DC where she works as a Producer covering Congress on Capitol Hill. While Trevor’s days of competitive athletics are over, he now likes to spend his time playing tennis and golf, working out, and going for bike rides with his fiancé. He is excited to explore Southern Maryland and treat those throughout the region so they can stay active and healthy.